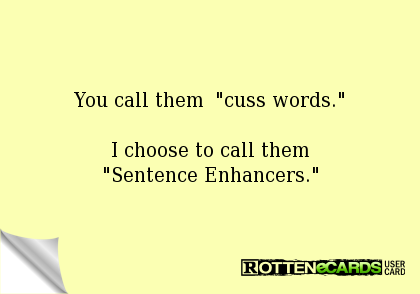 Actually, I refer to them as cuss words, but no one else I know does. When I use the word CUSS to refer to the mainstream utterances in everyday speech, I’m met with perplexity and sometimes giggles.

I think the eloquent term is swearing, right?

Yes, this topic has been broached in blog posts and various Writing Helper web articles, but for me, its usage in print has become more prevalent of late, so I figured What The Hell, and will add my two-cents worth to the growing font of reasoning/fact/opinion.

Whatever. I have tried and tried and tried to watch movies made in Hollywood, but for about twenty years now, the desire to tune in is nil. Once the F bomb arrived on the scene, it was over for me. Watching a Hollywood movie set in turn-of-the-eighteenth century, and having the characters use dialogue that sounds like The Sopranos isn’t my idea of a fun watch and is beyond insulting to know that the producers/writers expect me to believe it occurred back then with as much frequency as it does today.

Yes, I’ve been known to utter said bad word on occasion. Especially when I get so pissed off that I can’t think or see straight. And, whether this sounds pompous or not, I really don’t care, but NEVER did I EVER utter such refrains in the presence of my children.

It is what it is, and I’d much rather it wasn’t so wide-spread in the Western world, and I incorporate it in my own writing in a 1948 way, not by today’s who gives a f* manner.

Hearing the F word and some others still jars my sensibilities even if I’ve already admitted to uttering them myself. Reading them in novels is just as alarming, but not in the way you’re thinking. I’m simply virginal to this newcomer on the print scene. Especially the trochaic ‘ing variety of the f-bomb. It’ll take some time, or maybe not, to get used to seeing and reading these words in a (lol) Romance freaking Novel.

Just because we’ve become a vulgar bunch of amoral ninnies with no interest in expanding our vocabulary beyond the hip, now, trendy doesn’t mean we have the right to inflict such nonsense on others. OR those who lived PRIOR to such nonsense having occurred. Sure, people have cussed since whenever, but not at the rate or frequency as is done today.

Being authentic isn’t any more interesting or accepted today as it is to be thoughtful or modest, though. Still, for those of you too young to remember, there was a time when being crude just wasn’t acceptable. It was referred to as having class. Being too self-respectable to behave without dignity.

I abhor hearing F this, F that, and perhaps the WORST adjectival expletive of them all … J F ‘ing C. I almost don’t even want that typed or printed out here. You’ll never catch me uttering or typing G D, either. Beyond vulgar and highly inflammatory utterances.

These forms of blue speech won’t make it into the pages of anything I write.

That doesn’t mean I won’t be inflecting other forms, though. And, only because colorful modifiers are here to stay.

When my protagonist is hanging out with his buddies, or when he confronts the antagonist, there’re going to be some sparks that fly, and most likely in the form of (old-fashioned) bar-room drunk vernacular. The males in my stories let loose with some cuss words every so often, and I don’t have an issue with it or with reading it in others writing.

Well, I have my standard grammar complaints. Like dammit when they mean damn it. And, (though it isn’t uttered quite so often anymore), damn you (straight) to hell. Lol.  Where else is one to head off to once they’ve been damned, I wonder?

There’s something wrong with me if I can’t read these novels with a calm, nonplussed heart, munching on Lays and sipping my diet coke as I turn each page the way I would a fashion magazine or Reader’s Digest.

Its likely I’ll need to start skimming over such instances the way I skim over sex scenes. Neither does much for my interest-in-the-story mentality. My sub-genre is probably classified as Old-Fashioned, Contemporary, Sweet Romance with Safely Worded Sex Scenes and other Mature Content to include the occasional Swear Word.

Please let me know what you think! Cancel reply

Books That Take You On an Emotional Journey

Give Into Temptation—Read One More Chapter

Science fiction with romance and humor

Soulful love ...extraordinary passion ...Get some.

Writing is my oxygen.

Writer, Bookworm, and Member of the Human Race

Read on and I will show you another world within this one....

Romance Novels for the Beach

Find out which sexy books to bring with you, or leave behind, on your next beach vacation.

tell your stories, love your life

The Art of Blogging
The Rough Draft

One Word at a Time

There's a Bee in my Bodice

Welcome to Meggan Connors' website. Have a look around, stay awhile, and be sure to come back for updates and more!